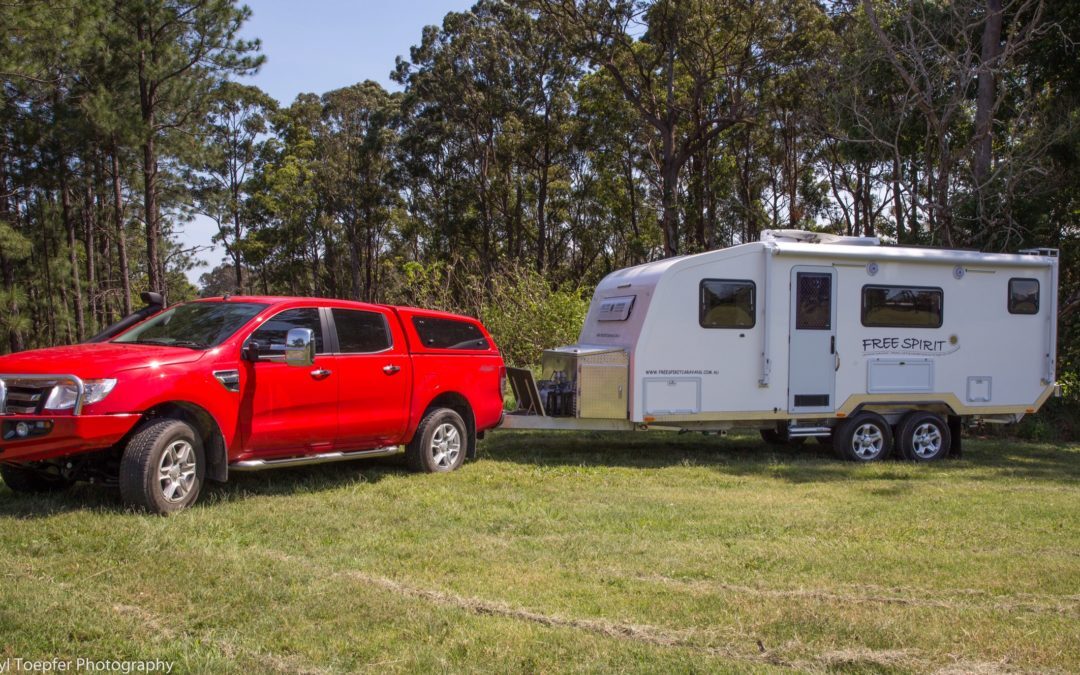 It is always good to receive customer feedback whether it be good or bad. This information helps you understand your business and what you are doing right or wrong. In this case, another positive feedback.

Darryl Toepfer purchased his Free Spirit Caravan back in 2015 and opted for AGM batteries at the time of manufacture. Darryl upgraded to Lithium back in 2016. Below is the email that Darryl sent through to Enerdrive recently explaining his reasons for upgrading. Sit back, grab a coffee and enjoy the read. 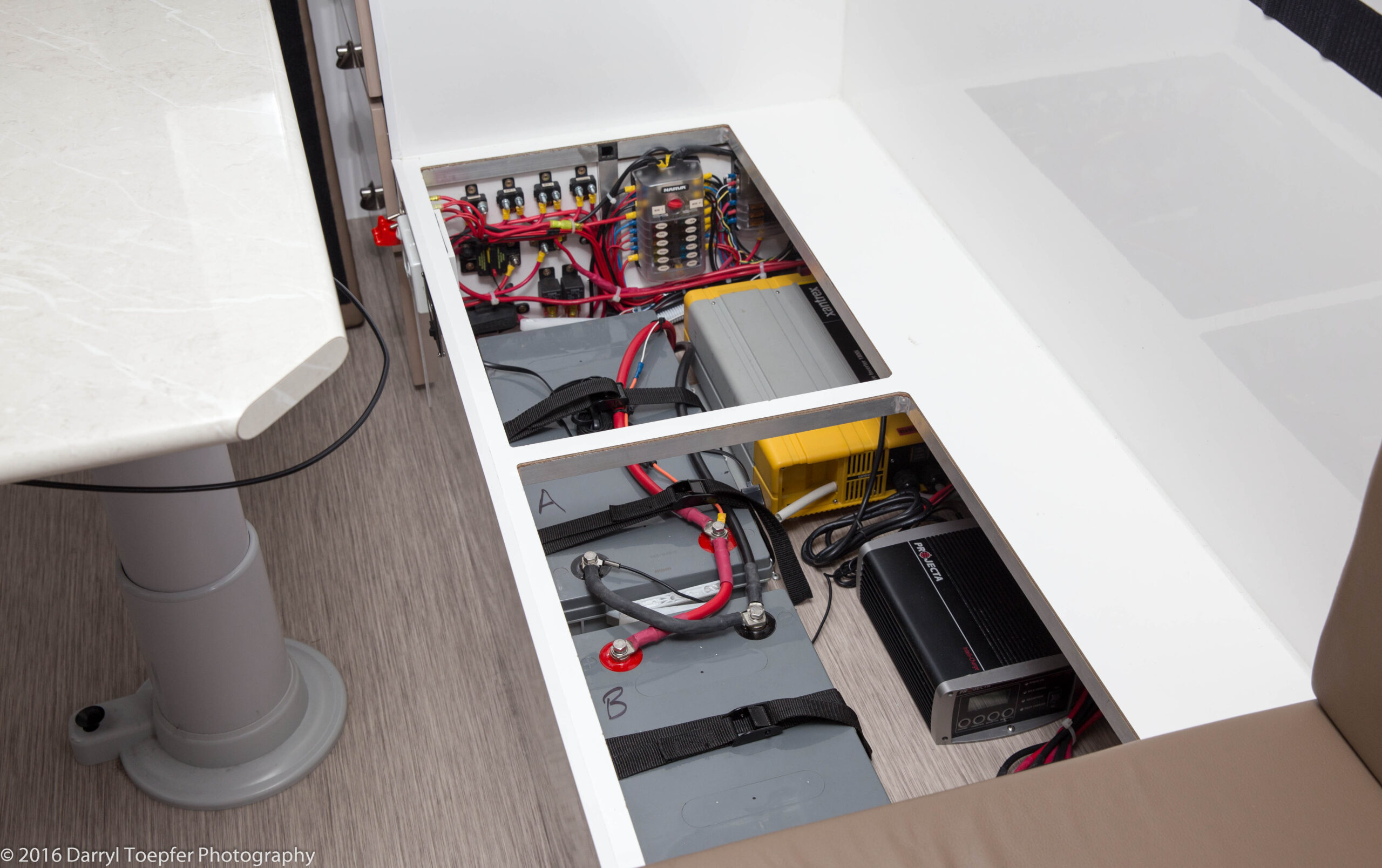 Coming from the airline industry, where lithium batteries of various kinds are causing all sorts of issues, including in-flight fires and other issues – perhaps even some crashes – I was rather gun-shy of having this newish technology in our van. So we opted for the good ole tried & true robust AGM technology – so we thought…!!!

2x 230 Ah AGM batteries were installed, I thought… good, that’s 460 Ah total or about 200 usable Ah of energy before needing to charge again (based on the common principle of AGM never being discharged to less than 50-60%). But talk about bloodyheavy – each of my 2x AGM batteries weighed in at 65 kg each. Plus the other stuff… I had a very heavy electrical system.

That’s when I started to pay more attention to our electrical system voltages versus % battery capacity (as displayed on the Enerdrive e-Pro meter)… it seemed crazy that I was regularly seeing sub-12 volts when the batteries were saying they still had more than 70% in them.

Turns out that someone had incorrectly wired up the two big AGM batteries in parallel Only one battery was bearing the whole load… and crashing…!!  I only stumbled over this error some months after delivery when rummaging around in the electrical bay searching for answers… and bingo, says I… (when this was found..!!). But by then the damage to that battery had already been done. Despite me reconnecting them in parallel correctly, those pair of batteries were never the same again.

But it was still several months after reconnecting them back in parallel that Andrew Wilson at Enerdrive got onto the issue – when I was bemoaning my concerns at how it was behaving badly – that he suggested I get the batteries properly load tested, as he thought one or more cells had collapsed. The bad one was pulling down the “good” one  Sure enough… when taken out (that was fun at 65 kg each…) and bench tested, both batteries failed miserably.

I need to add that, by this time, I had had several very good in-depth discussions with Andrew Wilson at Enerdrive – and I had done a lot of research. I can’t speak highly enough of Andrew’s willingness to assist, and be patient with me as I worked my head through the issues I had.

For example… he pointed out that the lithium chemistry used in the Enerdrive systems was NOT the same as those causing issues in aviation. Whereas Boeing was having trouble with their lithium-cobalt systems on the newest Boeing airliner (now fixed), and many airlines are very nervous (rightly so…) of the lithium-ion and lithium metal hydride used in many electronic devices, the Enerdrive systems instead uses lithium iron phosphate. Note – iron not ion. The lithium iron phosphate is slightly less energy-dense (meaning it weights a tiny bit more for the same punch than lithium cobalt used by Boeing – but is much more stable and much safer). 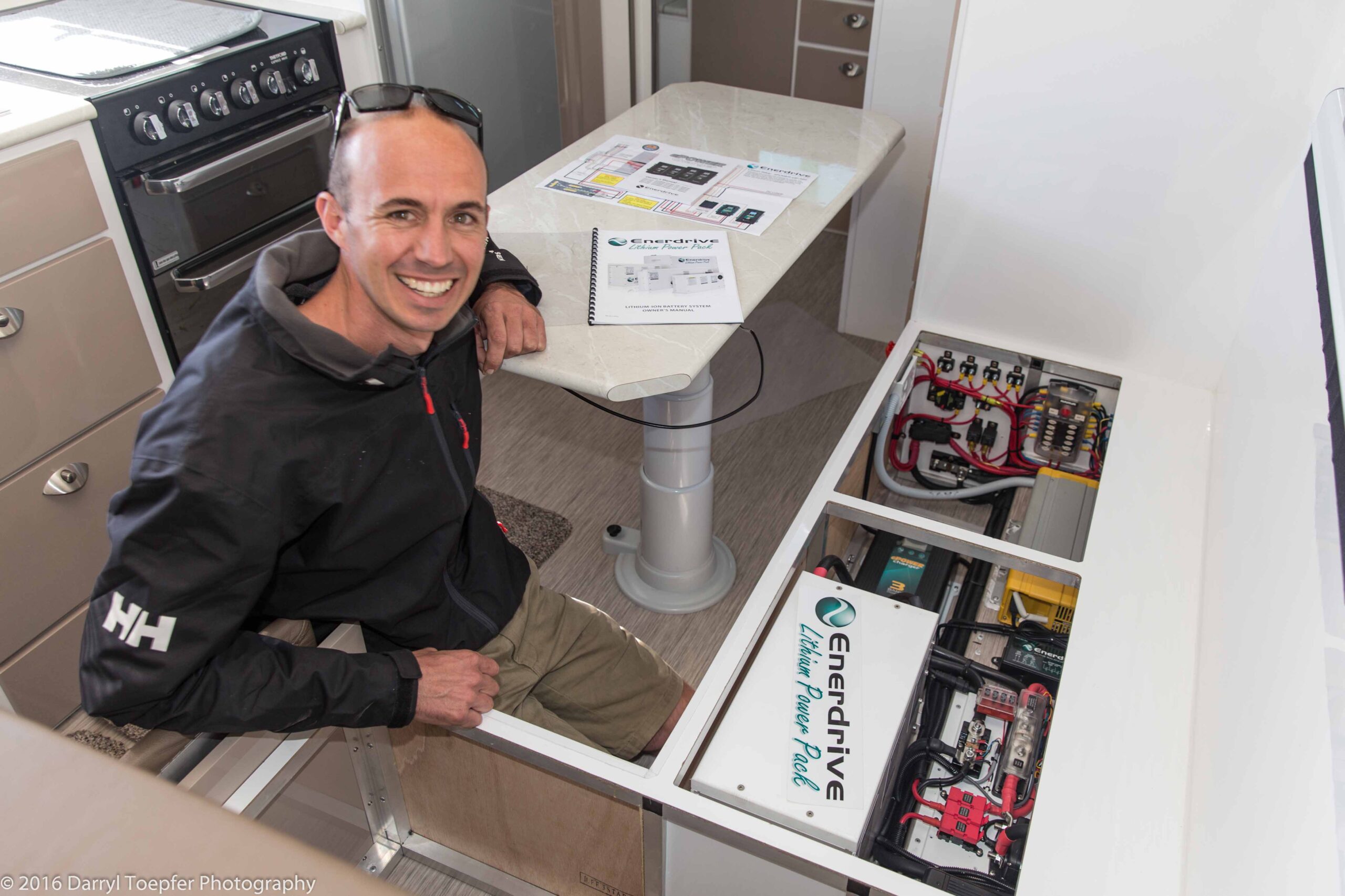 So I chose to bite the bullet – and upgrade to the lithium iron phosphate system from Andrew at Enerdrive. Bit more pricey, perhaps, than other brands – but I liked that it was an integrated system where all the components were designed together for each other. The price quote was just under 8 grand for the old system to be chucked out and a 300Ah lithium system installed (done by an Enerdrive recommended marine installer of all things in Sydney, Total Marine Electrical www.totalmarineelectrical.com.au

My van was parked at a secure marine boat ramp facility for the duration of the job. At the same time I also had a 4th Enerdrive150W solar panel put on the forward sloping roof. 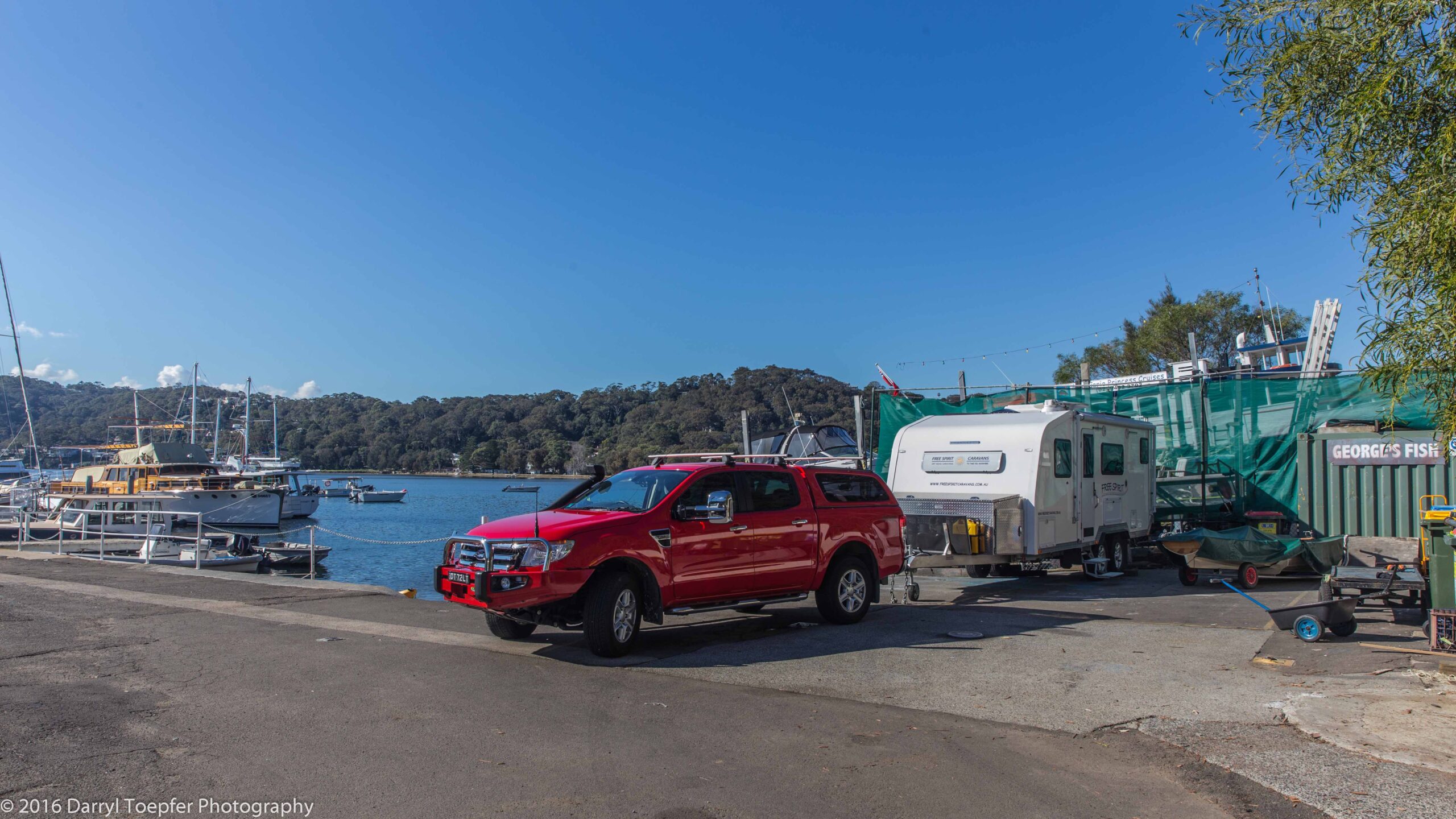 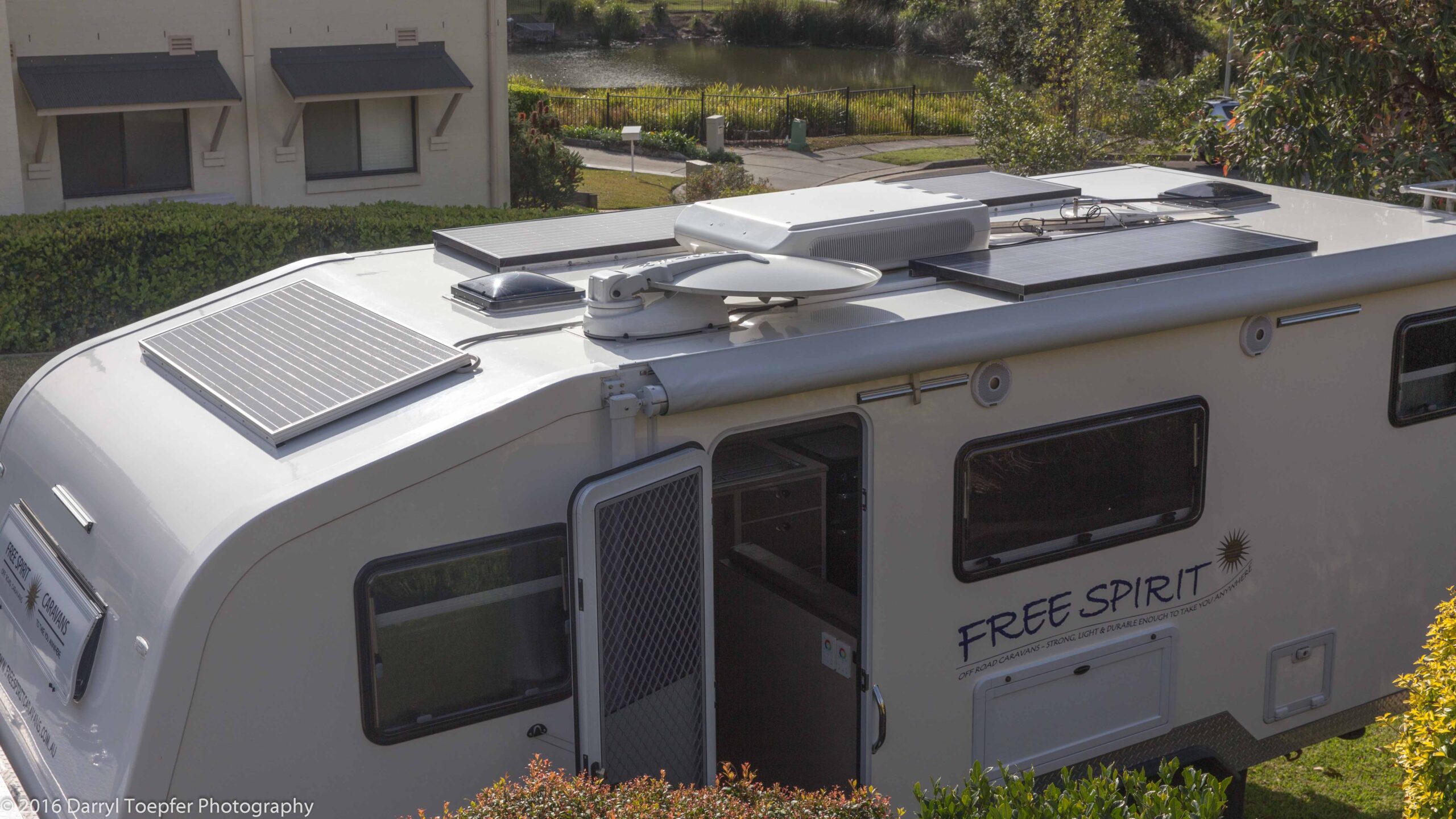 Was it worth all the fuss and that extra investment in the rig…?? You bet your uncle it was…!! It now runs flawlessly, and meets all my original specs for a robust, reliable & independent system. Sweet as… as a kiwi cousin might say…!! Been in now for 8 months and I am very happy with how it runs. Not a blip of trouble since…!

Like others have already said – unlike the AGM batteries – the lithium system will swallow all the charge you can give it, and stays right on hammering its high charge rate right to the last percent. I regularly see the e-Pro meter flashing FULL by lunchtime or early arvo, after having used around 100 Ah overnight (plus the days ongoing consumption).

And these lithium batteries can be run down to about 20% remaining (Enerdrive sets theirs to 24% just to give a bit or margin – and it will open a huge relay to disconnect the battery offline to protect it). All of which means I have more net-available power out of my 300 lithium system than the previous 460 Ah AGM. 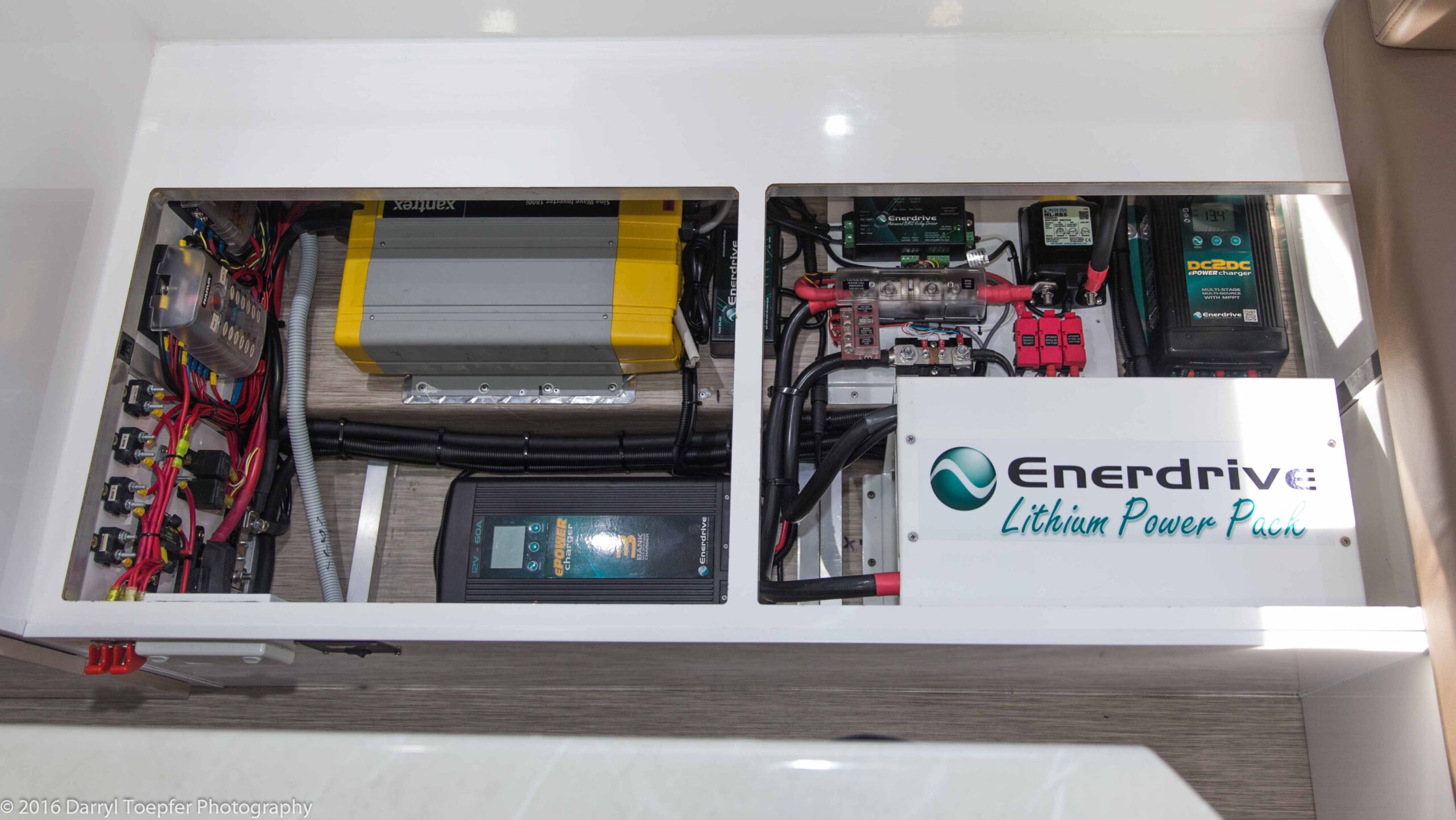 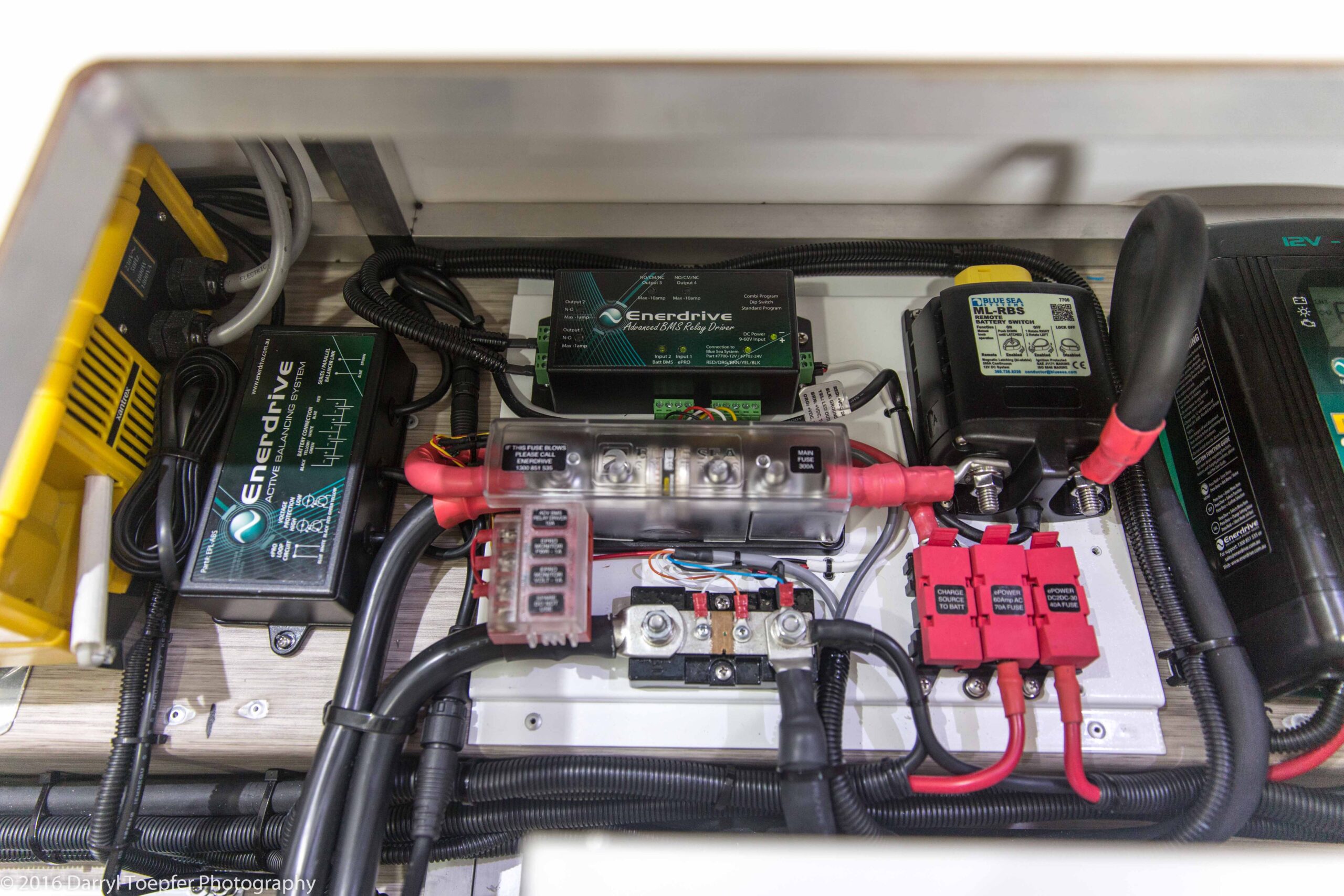 And finally… another huge benefit you already know is the weight benefit. My entire new lithium system, including the management boards, a much bigger AC2DC charger and the extra solar panel, still weighs in just slightly less than only one of the old AGM batteries…so I am a net weight gain equal to the other old AGM – ie, about 65 kg lower tare.

Well… that’s my lithium battery upgrade story. In summary… I’m sort of sorry I didn’t do my due-diligence and have the system installed at the get-go. Would have been about net $5K better off. But now I’ve made the change, I’m not missing the extra costs, with its outstanding performance.

Definitely recommend it… and btw… no more start issues from the Webasto heating system.

Thank you Darryl for the positive email and we hope that you enjoy your caravaning experience around this great country of ours.