This is a question we get asked all the time. The size of the inverter is really dictated by the loads that you want to run. Let’s say your largest load is a microwave. A typical microwave will draw between 900-1200w. With this load you would install a minimum of 1500w inverter. This size inverter will allow you to run the microwave and have a little left over for running small items like phone charger, fan etc. 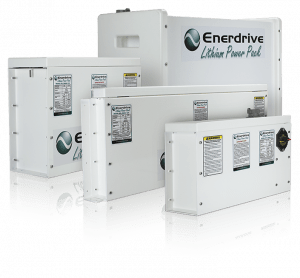 Systems similar to the Enerdrive Power Pack with external management  generally run large Prismatic cells which are capable of delivering up to 3C (3 times) their capacity. For example, a 200Ah battery can deliver a maximum discharge current of 600A, but most manufactures will limit the maximum discharge on this type of battery to 1-2C (200-300A) to deliver maximum performance and longevity. This type of lithium setup allows for much larger inverter installations, typically 2000w-5000+watts (subject to overall battery capacity installed of course.)

Now let’s take the 12v ePOWER B-TEC battery which includes an internal BMS setup. The printed circuit boards (PCB’s) are designed with compactness in mind to fit inside the battery. When cramming this entire tech into a small space, limitations come into play. Pretty much all of the Lithium batteries on the market that look like an “AGM” battery, suffer the same restrictions. 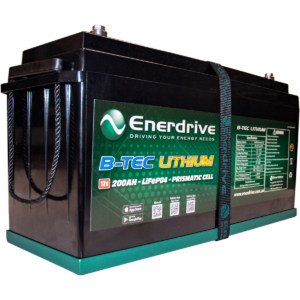 The B-TEC 100 & 125Ah batteries like the other brands on the market of these capacities are restricted to a maximum discharge load of 100Amps. This means that the battery is only capable of delivering a maximum of 100A at any one time. On the other hand, the Enerdrive B-TEC 200Ah & 300Ah battery has the ability to deliver a maximum discharge of 200A (up to a 2000W inverter).

So, with this information at hand, a common 100Ah-150Ah lithium battery of this type can deliver enough energy to operate a maximum of a 1000w inverter.

When calculating the amp usage of an inverter, you take the output wattage of the inverter and divide it by the battery voltage, i.e. 1000W ÷ 12V = 83.33 Amps.

The other question we always get asked is, what if I put 2 x 100Ah batteries together in parallel, can I use a 2000W inverter? Again we are talking about the Lithium batteries on the market that look like an “AGM” battery here.

As described above each battery has a maximum current output that can be achieved (100A per  battery). The internal BMS setups have a safeguard built into their system. If a battery reaches/exceeds the maximum current output, the battery will switch off internally to protect the BMS and the cells from over discharge.

When this happens, the inverter and any loads running at the time are completely disconnected from the battery. Generally after 2-5 seconds, the battery BMS will switch the battery back on. If the large load is still present then the battery will just shut down again and the circle continues.

This “ping – pong” affect between the batteries will eventually damage the internal BMS system of the battery, over-stress the cells and one or both batteries will end up failing, not to mention the inverter from continued  DC disconnections and any sensitive DC equipment attached to the batteries.

Bottom line, if you want to run large inverter loads above 1000w on a lithium battery, make sure you choose an lithium battery that is designed for larger inverters or a system that can be paralleled safely with active balancing between the connected batteries.